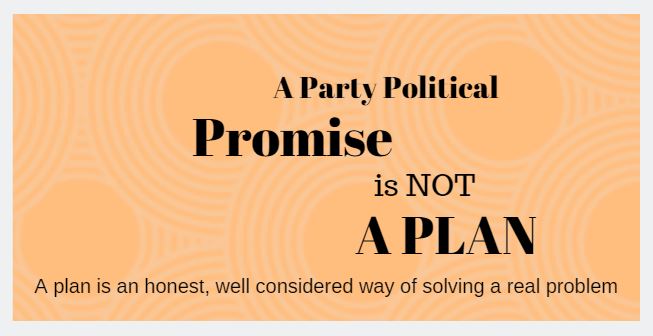 The Central Coast has suffered more than most regions as a result of the ugly battle between the two major political parties.

The parties are desperate, throwing around promises and commitments to spend our public money.

All this while the region suffers incredible challenges in family stress, housing, under-employment, telecommunications, roads & transport and the environment.

Yet these moribund political parties offer bits and pieces in the form of election promises, more often blaming each other for the very real problems in our region.

There is no planning, no complete consultation with community specialists, no public debate.

Instead we see party candidates jumping in front of cameras, holding big cheques or ‘hijacking’ community events, effectively dividing locals into two groups of for & against.

A Plan is Different

A plan is more than a word or a media stunt or a selfie in front of a community group.

A real plan requires research, discussion and debate. It needs discipline and the of building agreement.

A plan takes time and requires a large degree of intellectual honesty, sadly something that our political parties have all but abandoned.

A Plan is a strategy for the successful completion of a project goal.

The Central Coast suffers because there is no singular plan. There are at least three uncoordinated plans, one for each level of government.

The NSW government sees the Central Coast as a land use issue, primarily an overflow area for Sydney’s population boom.

The Federal Government sees the Central Coast as a place to save money. Pealing back hundreds of millions of dollars in infrastructure programs such as the NBN & Youth Training leaving the region hopelessly divided.

The local government has engaged in some serious planning processes and holds the greatest prospect for solutions in some areas.

Though the Council has yet to seek a mandate from locals on their plans. The political parties are starting to cause deep divisions within the council and that threatens to cause.

These observations have been formed watching all flavors of governments treat the region with political contempt. Leaving the Central Coast with a culture that discourages planning and encourages cheap political promises.

It was for this reason that in 2016 a team of locals started a legitimate non-party political planning process called the Community Plan Central Coast.

The CPCC process has resulted in a comprehensive 18 part policy plan, not a perfectly complete plan but a solid plan and a process that offers very real solutions that negates knee jerk policy by election promise.

Error: Error validating access token: The session has been invalidated because the user changed their password or Facebook has changed the session for security reasons.
Type: OAuthException
Subcode: 460