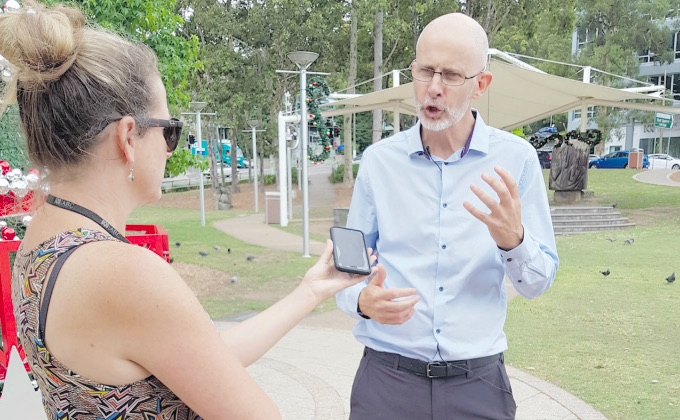 Hardys Bay resident Mr David Abrahams has announced he will run as an independent candidate in the 2019 federal election in the seat of Robertson.

Mr Abrahams announced his candidacy in Gosford on Thursday, December 13. Facing local media, he said he was “sick of party politics”. “Over the last 10 years, I have been involved in party politics and I think it is dysfunctional,” Mr Abrahams said. “I think most people on the Coast and most people in the nation agree that there is a high degree of dysfunction,” he said. “Parties are not in our constitution.

“The representative of the area is meant to be elected from the people of the area and answer directly to the people of the area and that is what I am going to go back to. “So it is back to the constitutional roots and have a good crack at being an independent candidate for the seat of Robertson.” Mr Abrahams acknowledged that his prospects against sitting Liberal Member for Robertson Ms Lucy Wicks, Labor candidate Ms Anne Charlton and Greens candidate Ms Cath Connor, were “historically very low”.

“At the start of our Federation, we had a lot of independents before parties formed. “Parties aren’t necessary if you have strong independents. “ I am buoyed by Kerryn Phelps, Cathy McGowan, Andrew Wilkie and even Bob Katter. “These people deeply represent their electorates and I am aspiring to do the same thing. “I think the Central Coast in all my years of looking at it is very often compromised,” he said. Roads, telecommunications, TAFE and university, water supply and the threats of mining and gas exploration were areas of significant compromise, he said.

Mr Abrahams said he believed issues like Wallarah 2 coal mine and seismic testing off the Coast “all the way from Woy Woy to Newcastle”, were Robertson issues, even though not specifically located within the boundaries of the federal electorate of Robertson. He said the major parties were “rolling over and allowing that to happen and I will be putting a voice to stop that seismic testing that will kill the fishing grounds all along the Central Coast.”

Mr Abrahams said he had “divorced” from the Labor Party but his run as an independent was not based on “sour grapes”. “I am just disappointed with the Labor Party.”

He was critical of an online voting process for selection of delegates for the Labor Party National Conference, stating that he believed the online voting process was “rigged” and “hacked” and that the party chose not to do anything about the flaws he had uncovered. “So I can’t be in that sort of organisation.

In terms of how he will direct his preference, Mr Abrahams said he was supporting the policies put together for the local government election under the Community Plan Central Coast. “There are 18 policies that I was part of developing with a broad spectrum of political voters and those policies will be basis of the plan that I will take to the electorate,” he said.